A dark-brown stallion decided when watering
Was done, as if safety was derived from steady
Movement, instinct not to linger complacently,
Unsheltered too long. Beckoning snorts sent
Ponies moving, though a lingering few took
Quick streaming gulps to last long nights
Amidst frozen marshes. 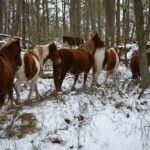 The stallion stood firmly in a secluded area,
Flanked by raised margin of an old trail, a place
Not for himself but for his pregnant mare that
Followed his beckoning nods, to sleep snugly
In tufts of dried grass, protection of his keen
Brown eyes, fending off intruders with kicks,
Teeth-reared bruising bites.

For information on Assateague Island click this link http://www.assateagueisland.com/