Whilst spring had arrived, days and nights 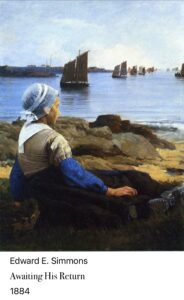 Seemed just as long, seas as cold, yet fishers
Took to cresting waves, lowering nets along
Distant rocky isles, coves and bays up and
Down foreshores. “She is old enough,” Papa
Said of me, Willow, watching for swaying
Lanterns of village fishing boats as they
Made night return. By land lantern, I would
Guide them through difficult tidal roost.