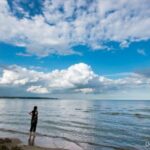 Numbness prevents me from explaining
How I feel — or don’t feel, an enigmatic
Uncertainty, seemingly predetermined
That has already “occurred,” as if what I
Understood was in reality past tense.

Days and times are often predictors of
What I’m supposed to do, my daily
Interaction between the world I know
As mine in relation to the presence of
Others, their hopes, dreams, and plans.

Thus is the perplexity of desiring to
Understand not only my purpose as
Person, but my willingness to listen,
Love, and to endure the confusion
That questions lucidity of my mind.

When and where did this confusion
First occur, that turned my life inside
Out? Perhaps it began on the ocean,
When entering dense fog. Nothing was
On radar, nothing to be seen or heard
Beyond the reach of my own hand.

In midst of miasma, no sound or light
Could penetrate, even thought was
Impossible, at least any reasoning
Or sensation that belonged to me.
Thus was the gradual disintegration of
What I understood and/or believed.

Whether it was hours or days when
Fog finally lifted, I cannot recollect.
However, my trawler and my mind
Had drifted miles out to sea, beyond
The usual edge of deep-sea canyons,
Past VHF radio range, compass bearings.

When I arrived at our town dock,
Nothing was the same; buildings and
Roads were wrong. I knew no one that
I encountered. My reality was more than
Altered, it was disconnected, rents in
Time and space, temporal distortions.

Wandering, I saw people, some familiar,
Many strangers, who apparently could not
See or hear me when I called to them, when
I screamed at them face-to-face. Am I in
Another realm? Perhaps I am ill with
Some infection, ghastly hallucinations.

Vaguely I remembered an emergency room,
Being wheeled to a trauma bay, nurses
Peering down at me, lights, and X-ray
Machines. I drifted away to ocean’s edge,
Lapping surf, reaching to bright sunlight,
Welcoming hands for the dead.