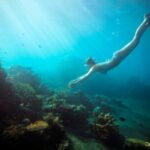 On a precipice overlooking the Aegean Sea, one
Misstep of slender sandaled feet would send
Thyonē to her death, lost to crashing surf against
Perilous jagged rocks. Such was her plight, as
She resisted urges to fall, alas to vault head first,
From dizzying heights, to escape marriage pre-
Arranged to a foreign nobleman she neither
Loved nor knew, life of spousal captivity, sexual
Servitude.

Thyonē prayed to sacred Poseidon at his fluted-
Columned temple emerging above the Aegean. For
If she heard no guiding thought-words, she would
Cast herself into foaming waves, where undulating
Seagrasses would be her shroud, coral reef her
Tomb, solace for indignities of forced matrimony.
As neither fish nor mermaid, nor living woman,
Thyonē would plead to her god, Poseidon, for
His trident to provide death’s eternal sleep on
A secluded ocean bed.

In silence, Thyonē felt no words welling from within,
No soft echoes of her god’s voice, gentle as ocean
Breezes mingling amongst folds of her green linen
Gown. She sought his radiant warmth, sun on
Olive-skin arms, magical lights of dark Aegean
Eyes, reassurance, guidance of her Ocean Master,
Who loved her as his own. Tomorrow was end of
Virtuous life to suffer forced obedience, her body
Defiled, unholy nights at the hand of a sex-
Intoxicated husband, most unworthy lord.

As Thyonē placed weary foot upon the first
Deathward-sloped marble slab, a female voice
Called out, “Poseidon has heard your prayers. I am
Iolē, his maidservant, here on our lord’s behalf.”
A misty-formed Iolē led Thyonē to Poseidon’s inner
Sanctuary, divine solemnity. “In presence of his
Image, tell us what you wish.” From his marbled
Promontory, the Aegean lay passively at the Sea
Lord’s stone feet. “I wish to be my lord Poseidon’s
Sea-maiden, under his protection, to know not
Pains of married womanhood,” Thyonē responded,
Her right arm extended, yearning for ocean edge.