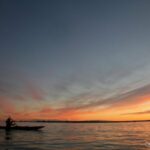 Visitors amongst our tent-rings wrested me from
Deep protective sleep. Gods or brothers, I know
Not which, explored our campsites, searched
Tribal hunting grounds, new-world Inuit, armed
With weapons strange, tools advanced, methodical
Ways to unearth secrets of Thule past.

Hovering amongst them, I recognized familiar
Features of my people, dark hair and keen eyes.
Invaders they were not, as much inquiring about
Our distant life, thousand winters past, an epoch
For deities we worshipped, huddled in skin tents
Or en masse by glacier-fractured boulders,
Prayers lifted skyward, guidance and protection.

By such visions came realization of who I am,
Shaman of Thule tribes, hunters, fishers,
Roamers of primeval tundra, soaring soul to
God-heights, flickering flame of sandstone
Lamps, persistent and remaining over sacred
Summits where we buried our dead, lost to old
Age, ravaged by disease, killed by polar bears.

Who will tell our story of archaic wondrous
Times, to understand the people who thrived
Past millennia? As a shaman, then and now,
I will patiently guide my modern brothers to
Uncover archaeological secrets hidden by
Weathered ages, found by turning stones,
Gently scraping undisturbed telling earth.

Under cloud-swept sunsets, listen for my voice
Whilst walking tranquil shores, songs of kayak
Paddling, calls of darting terns and gulls, breath
Of rustling grass, for I have noble duties to per-
Form, love of my people, guardian of our bones,
To reveal our solemn past, casting sunlight on
Thule traditions, discoveries long awaited.

This poem was inspired by the intriguing news article found here:
http://www.ctvnews.ca/sci-tech/remnants-of-ancient-inuit-hunting-camp-found-on-hudson-bay-coast-1.1891767#