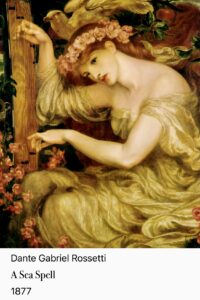 Who is Thera? She may be related to Homer’s “Thoe” (Θόη), an Ægean Ocean nereid or an oceanid, symbolizing beauty and kindness of the sea. Whilst not one of the classical nine muses, Thera (pronounced Thee-rah’) is poetic and searches for seaside places to linger, amongst lighthouses and lighted channel markers. I hope you enjoy these poems.