In the brig Advance, Elisha Kent Kane, MD led the Second Grinnell Expedition to search for Sir John Franklin and his men. During August, 1854 with the ship fixed in ice, Kane sent Isaac I. Hayes, MD south from Rensselaer Harbor to reach civilization to arrange rescue. Johan Carl Christian Petersen, while sick with scurvy and rheumatism, was the first to volunteer to assist and guide Dr. Hayes in arduous, nonetheless, unsuccessful trek south to Upernavik. Petersen’s knowledge of the Arctic and Inuit and practical abilities were instrumental in preventing the likely death of Hayes and the rescue party.

Born in Copenhagen June, 1813, Petersen was initially trained as a cooper. Seeking adventure, he moved to Disco, Greenland, married an Inuit woman, learned the language and developed a reputation as a capable mechanic who was able to repair or fabricate items on ship or in the field. He was also an excellent hunter, trapper, and ice navigator, and as Hayes describes, a man of “courage, caution and energy.”

During his time with Hayes, Petersen manufactured items necessary for survival from knives from keg hoop-metal to a complete dog sledge with runners of hoop-metal and hardwood. He sewed fur clothing using a “needle 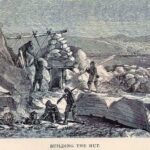 and palm,” a device normally used to mend sails. He repaired the party’s boats when damaged from ice and rocks, and was instrumental in constructing a wood and sail hut in a sizeable rock crevice that served as their main shelter for long weeks against Arctic cold and snow.

Of note, however, was Petersen’s ability to understand and interpret not only the Inuit language but infer their intentions and deceptions, including a murder attempt on his life and that of William Godfrey. He negotiated or traded with Inuit for sledge dogs and particularly for food critically needed to recover from several weeks of starvation, disease, and physical exhaustion.

The loyalty and bravery of the Dane Petersen can be understood in his parting words to Hayes as he left on dog sledge for the Advance: “If we ever reach the ship, we will come back for you, or perish in the attempt, as sure as there is a God in heaven.”