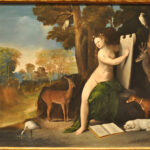 Circe and her Lovers in a Landscape, Dosso Dossi, circa 1514, National Gallery of Art.

As deer grazed lawn gardens at an isolated
Mountain estate, I investigated the recurring
Sighting of a guest-startling ghost. After an
Encounter a year ago, a woman mysteriously
Disappeared. Still unsolved, a paranormal
Investigation brought me to surveil night
Darkened hallways and antechambers on
A fateful summer’s night.

In elusive avoidance, a faint translucent
Vapor materialized, circumventing my efforts
To discern its past or why it clung to a cold,
Pallid plane. By accident or fate, spirit and
Flesh abruptly separated, life-sustaining
Breath vanquished. Tactile sensations and
Simple joys, often granted-taken, were
Tragically twained.

Glimmering light in the corner of my eye,
The disembodied soul kept a weary electronic
Detachment from cameras and instruments
To detect and follow its ethereal path, shrewd
Skills of denizens of mercurial ether realms.
My heart, though, felt quiet angst, a voice
Searching for absolution, release of long-
Suffering psycho-spiritual pain.

As mist thickened and entwined, the apparition
Took mortal form, an effort usually reserved
For near-waking dreams of mournful family
And friends. In fading light, a woman of
Regal radiance hovered arm’s distance away.
Gown-adorned, she revealed a compassionate,
Knowing face that once consoled others in
Anxious times of need.

“I’m afraid,” she whispered. “Not so much
For sins committed but for what I neglected
To accomplish.” For an instant she faded
Wistfully, as if pained, reemerging fully
Formed, a statue of marbled stone in self-
Illuminated light. “My fears shackle me to
My earthly grave.” Like a somber melody,
Her voice resonated in my heart and mind.

What response could I provide to a modern-
Day classical statuette? I had no incantation
To release or to restore. I felt, nonetheless,
This enigmatic pale-stone vapor was em-
Powered by her plight. “I was once a way-
Ward soul,” I offered. “Years wasted with
Worry and doubt. In death, second chances
Are regrettably lost to assist those in need.”

“Would you help me,” she asked, her voice
Waning like thready pulses. With those few
Words, she had elicited my empathy and
Obedience. Henceforth, I was no longer was
Ghost seeking but serving an enchantress.
Indiscernible in visible light, UV or IR,
She stood in stony anticipation, if not in
Irritation, expecting my affirmative response.

During the night, my ghostly friend entered
My dreams, descending on my mind and body
In unveiled passions, more than I had agreed
To or could tolerably withstand. Like waking
From anesthesia, I was unsteady, benumbed,
Until a voice of equal strength to my own
Greeted me with “Good morn, my love! My
Name is Circe.” She had taken me over.

“If you are not feeling well,” Circe stated, “I
Have a simple potion that will quell the
Dizziness within.” Before my or our eyes,
She took herbs, ground roots and berries,
Adding a sanguine-syrupy liquid that resembled
Clotted blood. In a mirrored sort of way, she
Presented it to me, and I or she or we downed
The acrid draft with one quaking gulp.

That afternoon, I awakened in sunlit grass
Next to a melodious mountain stream. With
My senses enhanced, I was amazed of the
Abilities Circe had bestowed. I ran and jumped
With ease, until I realized that I was one of
The many deer that graced the estate lawns
And copse of stately cedars, perils of offering
A captivating apparition second chances.

This poem incorporates a variation of the mythical goddess, Circe, who according to Homer, lived in a mansion in a clearing flanked by trees or stately cedars as depicted in Dosso Dossi’s painting. Circe used potions to transform her enemies into animals. In this rendition, the apparition-enchantress Circe used her drafts to take a woman’s body as her own, transplanting the unwitting victim’s anima into a deer.