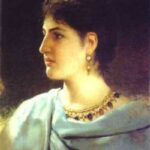 Mixture of mythology and historical-fiction, these poems are often inspired by writings Homer, Catullus, and Ovid. As such, many poetic characters are transformed by personal Ovidian-type metamorphosis. Paintings by Godward, Waterhouse, Alma-Tadema, and other WikiArt artists are included as illustrations. Thank-you for reading.