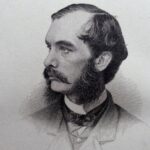 When first reading The Open Polar Sea, “The Arctic Night” chapter became my “quintessential Hayes” and one of the reasons that I continue to study his writings and to collect his books. In Chapter VXII, Hayes’ prose is poetic, lending itself to elegant free verse describing the winter night of January 20th 1861. I can imagine a solitary Hayes some distance from his ice-locked schooner, United States, where he “wandered far out upon the frozen sea” on a below-zero Greenland winter night. There he observes and reflects on “nature…exposed on a gigantic scale.”

Perhaps later that evening or the next day, Hayes penned the passages of this chapter snugly in his ship’s cabin while wrapped in an afghan or buffalo-robe and while under the watchful eye of his new companion, Birdie, a Maltese-colored Arctic fox. While five pages in length, Chapter XVII is exquisite reading, whether by itself or as part of the complete work, providing a greater appreciation and understanding of Arctic explorer and author Isaac Israel Hayes, MD.

This poem is composed from Hayes’ illustrative writings in Chapter XVII, pp. 224-225:

Out of the glassy sea, the cliffs rear their
Dark fronts and frown grimly over the
Desolate wastes of ice-clad waters. The
Mountain peaks, glittering in the clear,
Cold atmosphere, pierce the very heavens,
Their heads hoary with unnumbered ages.

The glaciers pour their crystal torrents
Into the sea in floods of immeasurable
Magnitude. The very air, disdaining the
Gentle softness of other climes, bodies
Forth a loftier majesty, and seems to fill
The universe with a boundless transpar-
Ency; and the stars pierce it sharply, and
The moon fills it with a cold refulgence.

There is neither warmth nor coloring
Underneath this ethereal robe of night.
No broad window opens in the east, no
Gold and crimson curtain falls in the west,
Upon a world clothed in blue and green
And purple, melting into one harmonious
Whole, a tinted cloak of graceful loveliness.

Under the shadow of the eternal night,
Nature needs no drapery and requires no
Adornment. The glassy sea, the tall cliff,
The lofty mountains, the majestic glacier,
Do not blend one with the other. Each stands
Forth alone, clothed only in Solitude. Sable
Priestess of the Arctic winter, she has
Wrapped the world in a winding-sheet and
Thrown her web and woof over the very face
Of Nature.