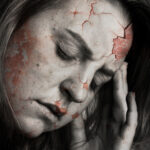 Illness began as unusual pains,
Vision blurred in one eye, an arm
Or leg with passing numbness,
Better ignored than dwelled upon.
Improved tomorrow, after a nap,
Few pills from reassuring bottles.

Thus begins plight of the unwell,
Another unwitting person who
Contracted disease or disorder,
Who learned to tolerate impair-
Ment, coping daily, with chronic
Debilitation, young and old alike.

At some point, lumps and bumps,
Veiled hopes, or fatigue cannot be
Ignored, something is wrong
Beyond a single doctor’s visit
Familiar remedies that once helped,
In animosity ceased working.

Now a doctor hastily scribble notes,
Talks on the phone, tick-tacks on
The computer, as if all cures
Reside therein, consultations,
Specialists, referrals, diagnosis and
Hoped outcomes merrily pirouetting.

Voices on the phone are much the
Same for the unwell: quiet, cordial,
Educated yet equally debilitating
As disease, lingually lethal strings
Of vowels and consonants, spiders
Screeching to insects ensnared.

Dilemma of the unwell, caught on
A carrousel, a revolving medical
Maelstrom, new medications and
Treatments, riding painted ponies
In and out of hospitals, beyond
Faith and prayer, life expired.