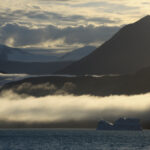 Fog descends just above the ocean on the marine layer.

For several Greenlandic summer nights, Hayes on
The screw-steamer Panther transited the Arctic Circle.
Drifting amongst icebergs, a floating realm of towering
Alabaster islands, concerns turned from ice navigation
To bewilderment as ship and crew struggled for visibility
In a descending mantle of opaque, villainous fog.

This poem was inspired by events in “The Land of Desolation,” where Isaac I Hayes, MD recounts his experience similar to marine layer fog in “Part the Third. Under the Midnight Sun,” Chapter 1. “Across the Arctic Circle,” pages 191-195.

For information on marine layer fog see this link:   http://www.srh.noaa.gov/jetstream/ocean/marine.htm