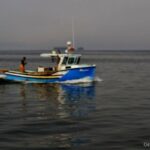 Rare opportunity, I had dinner with a
Retired Maine lobsterman, an elderly
Gentleman, thin, frail, venerably feeble,
Yet still he still retained that discerning
Glint in pale blue eyes, decades searching
For buoys and poly-balls dancing and
Disappearing in Gulf of Maine dark chop.

At times we sat in knowing silence, two
Fishers across the table, not sizing up
The other, but quietly understanding that
We both knew the water, smell of salt and
Diesel, fatigue of wind and sun, lifetime of
Accomplishment, hauling lobster traps.

His right hand trembled whilst we ate,
Constant movement of his fork or awkward
Coffee stirring. Years on Maine waters had
Taken their toll, perhaps some Parkinson’s
As age and infirmity took hold, ever still a
Survivor who had outlived his license, boat,
His stripe-painted floats, and weighted traps.

From several decades on rocky coastal
Waters, he had no regrets, though he had
Witnessed change in lobster management
And in ocean climate. He was adamant
About change in climate, fisheries near
Collapse, sincerity of age and experience
That kept local deniers at bay.

And so we ate, talked, and drank another
Cup of coffee, strong and black enough to
Stain white teeth and mugs. Between sips,
His advice was read the water, watch the
Weather, come home sooner than later,
Before nightfall. He smiled, we both knew
He often broke his own rules.

As much as I enjoyed our dinnertime, sadness
Reigned when we separated with firm hand-
Shakes. Grips from hauling lines had not left
His hands or arms, nor had his sea-wisdom
Acquired over many years, stolid lobsterman
Who still attended church, sand hymns, and
Prayed to God.

What came from this evening with a quiet
Plaid-shirted lobsterman? My desire to per-
Severe on oceans, to fish when I felt too tired,
To accept my place amongst ebb and flow of
change and tides, keep diesels burning and
Halogens glowing aloft, fishing all night in
Spirit with my venerable friend.