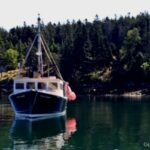 We used to work shrimp boats during winter,
But that fishery is near collapse. Lobstermen,
Men and women, extended seasons, working
Traps set deeper as lobsters retreat from cold
Shallows to ocean warmth, decisions based on
Family and checkbook, we knew the answer:
“Go longer and go deep.”

Silence reigned as we drew trap diagrams
On paper placemats, juggled depths and
Distances in our heads. We’d have to re-
Configure everything, 100 fathom lines,
Larger buoys, longer soaks, heavier traps,
Stronger currents, the list went on, and
All agreed on first talking with our wives.

That’s the way it began, the way nearly all
Lobstering decisions are made: over coffee,
Hard faces, ruddy hands, around one table
Was 120 years combined experience, more
Blueberry muffins. As if prompted by seaward
Tides, someone said, “Let’s do it, men at this
Table, pick a skipper and two sternmen.”

We sorted inventory, who had retired gear,
Larger traps, whose license meant color of
The buoys, and a minor point, we needed
$125,000 for a used boat we’d refurbish this
Winter. Following morning, I scraped frost
From the windshield, headed to a boatyard,
Next year’s lobster season began today.

When Maine lobster season opens in spring, they move from deep
ocean waters to inland bays. As season ends, lobsters return to
ocean deeps. Some lobstermen operate year round on Gulf of Maine.