I. Death of Arkadios Family.

Calamities to House of Arkadios, my mistress,
Harmonia, by carriage escaped to Ægean Sea,
Yet death was not satisfied until mother and
Two daughters fell into fevered death, leaving
Me, Aktë, their maiden-servant lone survivor of
Disease arising from Asia Minor, immunity
Acquired from Persian family homeland.

Slave purchased from distant Asian strands,
Whether war spoil or illegitimate daughter,
I knew not which. With seven years in their
Service, observing, learning, I had become
Unlawful heir to family wealth, columned
Villa, jewelry, virtues of Pandora’s deadly
Afflcitions, morbid bodies reduced to ash.

Delighting in family finery, I too acquired
Slaves, ironies that those who enjoyed nascent
Democratic freedoms purchased maidens to
Perform labours, sexual favors if desired, wine
And oil, licentious acts performed at my nod,
Gratification never known nor dreamed, whilst
Cruel mistress or pained slave.

Taste of wealth turned to debauchery, each
Night more exotic than before, intoxicating
Trance of poppy, I gave my body to muscled
Suitors, longing for instillation, breasts naked,
Mother’s milk for all desiring taste, enslaved
To drunkenness and flesh, family treasures
As favors given, fingers now ring-bare.

What sacred blessings does Pentelic marble
Possess? Voices I known in servitude, began to
Speak within my mind, asking simple questions:
“Why?” “Where?” “How?” Ghost of Harmonia had
Returned, loyal wife who not tolerate her estate
Usurped by sinful slave, one who accompanied,
Labours on evenings and on the early morn.

O! Narcotic night, lust hot as smoldering bones,
I remember wrestling in my mind, arms and
Legs flailing, tempests wailing, too drug-
Deranged to resist, by force, another took my
Body, reeling amongst dark clouds, neither
Day nor night, my death had come, strength
Of Harmonia, loving mother’s might.

In time, House of Akradios was restored, dignity
And respect, Harmonia remarried, and by godly
Prayers, her two daughters returned, holy gifts
Blesséd in sacred eyes. That lost to fire and scorn
Was rightfully restored, libations of wine and
Oil offered at holy funerary temples, bone-filled
Urns of fate-redeeming Pentelic marble.

For those who enjoy reading John Keats and his celebrated poem, “Ode on a Grecian Urn,” the urn was sculpted by Sosibios from Pentelic marble hewn from quarries on Mount Pentelicus in Greece. Flawlessly white, this marble has a faint yellow tint that imparts a golden hue under sunlight. In this poem, Pentelic marble has restoring, fate-redeeming qualities.

For information on the literary term, Sosibios, see this link:
http://www.oceanic-visions.com/index.php/sosibios-literary-term/ 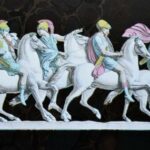