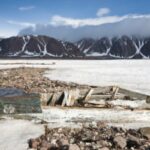 Haunted by her previous readings, Ahnah studied her grandfather’s old photos and sketches. Many were made during his travels across the eastern Arctic from Kuujjuaq to Iqaluit (then Frobisher Bay) and to Pangnirtung. Ahnah now felt disconnected from family, as her grandfather was someone she hardly knew, an occasional elderly voice on the phone, a scrawled signature on a birthday card. She could not grasp why he settled in Grise Fiord, Nunavut’s most northern community, as if he was estranged from his family or in self-imposed exile.

Sledge dog fight:
At times, there is no right or wrong only injury and death, hardships that too often visit our people. This afternoon three chained sledge dogs began fighting over caribou leg bones and skin. The fight was to the death. They attacked each other causing their chains to tangle. Next, they tore down skin drying lines, and were tangled in those. The owner of these dogs beat them with a section of lumber from the drying lines. The dogs were bloodied at their necks, unfazed by his repeated beatings. One breaks free and runs away, attacking or scaring several children. A father of these children shoots the dog point blank with a .30-30 rifle in front of the children, killing the dog. Who is at fault? Who will pay for the killed dog? The father who shot the dog told me, “He knew that dog, that he was a fighter, that he deserved to die.”  He was understandably angry. Fortunately, none of the children were hurt.

Drinking spray deodorant:
Drunkenness plagues our people. The nurse at the nurse’s station says it is “epidemic.”  In our small airline ticket office, a young man from another community was found unconscious in the washroom. Beside him was a spray can of deodorant. He may have tried to drink the propellant. I do not understand lost souls such as his. Yes, there are problems: boredom, unemployment, drugs, and crime. Sometimes suicide is the only escape. Drinking shampoo and deodorant is not the answer.  Can we not find ways to reach the troubled among us, to provide them opportunities for a livelihood? As the saying goes, “We either work for the government (from the south) or live off the government.” As northern peoples, we must manage our own affairs and not disgrace ourselves vomiting shampoo suds.

Poverty among us:
There are those of us who live in poverty. At times, it is their own choosing, or they make wrong choices. They live in shacks of plywood, scrap materials from buildings torn down. We use all wood, glass, wiring we can of older buildings. Some were built during World War II and are better than prefab houses today that have 40 or 50 year mortgages. Families will be burdened with debt for generations, handed down from father to son. They have many conveniences: electricity, water, toilets, kitchens, freezers, more “things” we now cannot live without. Tonight there are those who cannot escape poverty or the cold, and those who live and sleep in comfort and in mounting debt. I recognize inequities, but one man cannot change this damaging pattern. Yes, it’s “epidemic,” in all communities.

Pregnancies and STDs:
We face serious problems that seem more prevalent than in years past. They are unplanned pregnancies and STDs. Both are bad in their own ways. Iniut children having children and contracting and spreading diseases. As a people we tend to ignore it until it is our daughters who are pregnant or our children who are diseased. Then it is an emergency, and we look to the south for solutions to our problems. There are education issues, social and religious concerns. I learn about this almost monthly now. Parents approach me wanting help, solutions, one of which is abortion. It is a knife that cuts both ways. Burdensome issues that have no “right or wrong” solutions, except prevention. For me, to deal with this as an elder is a heavy task. I pray for those who do not pray. I approach my God for those who are godless. Will he listen? Yes. Will he answer? No. That all I can say at this late hour. Last night I did not sleep well because of these problems.  It has affected me that much, perhaps worse than poverty.

Culture of North vs South:
When she is not busy, I talk with the nurse from the south about our issues as a people, threats to our culture. Monique is from Ontario and works here during the summer. To treat us she says is her “calling.” She does not look down on us as a people. For that, I respect her, and we have an open dialogue, weekly if not more. The outside brings us much good: technology, health, birth control, modern things. With the introduction of  technology comes change, threatening our traditional way of life. The spiritual part of us suffers first. When the spirit suffers, so do the people. They do not recognize it at first. Then it is too late. We are snared like a hare by an invisible wire. I know because I feel it within myself, so the effect is deep and widespread. Technology comes towards us like herds of migrating Caribou. It approaches sleepless, marching, without soul or conscience from the south, yet we welcome it like return of the sun. There are no easy answers but many challenges.

In the next day or so, Ahnah will share her grandfather’s writings when he met Father Elgin, a Anglican Priest who was visiting Baffin Island.