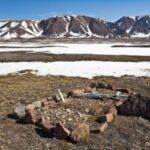 For my children I mourn; their songs have
Fallen into silence. Their eyes have lost their
Lights. Enemy of my Inuit tribe, disease has
Taken those most susceptible: young who
Should be spared life’s hardships, playing
With toys lovingly hand-carved, clinging to
My nursing breasts, and old ones, whose eyes
Are dimmed with age, bones feebled, whose
Teeth are worn or lost, depending on us for
Care during their arduous final years.

As a people, we have followed the old ways of
Our fathers. We searched summer beaches for
Driftwood for winter fires. To survive desolate
Dark seasons, frozen meat we have cached
Under ice and stone piles. We gave thanks for
Every kill, for flesh to sustain our people,
Animals skins for clothing and shelter, bones
For tools and music to thank Sedna and to
Praise our provider, Holy Breather of Life.

Powerless from sorrow, we watched as our
Children died. At first, a fever gripped the
Body trembling. Held fast in chills and sweats,
The mind knew not itself. For some, they
Found themselves, returning to their family,
Weakened from the spirit stretched to realms
Of foreign tongues. For the unfortunates of our
Tribe, breathing became foul odors deep
Within the chest, drowning lungs until in
Agony, the heart in silence stopped.

In desperation, my tribe pleaded to our shaman
To approach the Holy Breather for guidance. In
A smoke filled tent we crowded, and amongst
Our lowly beating drums, he began his ritual
Chants. When he attained a heavenly height,
His eyes were that of another, a voice that spoke
From ancient ages of universal love and wisdom.
Reassured, the disease was not an evil sent for
Sins committed, we learned that like the wolf
And caribou, the predator took weakest of our
People, young and very old alike.

According to divine voice, an invisible wolf of
Wind and blood prowled our land and killed
Our people, disease invading from the south
That took thousands, until none were left to
Bury the infected dead. While six dead of our
tribe hurt us to the marrow, we felt fortunate
That no more perished. To keep the invisible
wolf at bay, we moved dead bodies onto ocean
ice. Still dressed in skin clothing, we attached
Heavy stones and lowered them into an open
Lead. By sending them to Sedna, we prevented
Sickness from spreading to nearby Inuit tribes.

As an old women, my sight dim, my bones
Feeble, I visited an isolated Inuit cemetery
Where a distant tribe lost loved ones to the
Ravages of the wolf. Educated and informed,
I understand that a virus spread from Labrador
To Nunavut and beyond. Our shaman and
The Holy Breather saved us before white men
Dreamed of vaccinations or antiviral drugs.
Instead, we sent our dead to Sedna’s depths,
Where she washed away disease, lessons of
Our elders who followed faithfully ancient ways.