This is an update on four “Hayes” signatures found in this copy of OPS. After conducting Internet searches, these signatures may be those family members related to George McGill Hayes, who was the two-term mayor of Canandaigua, Ontario County, New York (1938-44, 1948-49), and grandson of Augustus Graham (as in Alexander Graham Bell).

The “Hayes” signature dated 1926 is most likely that of George McGill Hayes. The signature is written in soft-lead pencil. This is the most definitive of signatures found in this copy of OPS – and is the basis 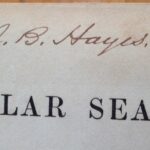 of the following preliminary findings.

This OPS has two signatures in the name of “J. B. Hayes,” one on the inside cover, the other on the title page. These signatures may be that of Joseph Byron Hayes, a relative of George McG. Hayes. See linked “Hayes-Coleman” family document below.

Finally, the “G.B. Hayes” signature may be that of Dr. George Byron Hayes, a WWI pioneer in maxillofacial surgery, and if this is correct, a member of the

The possibility exists that the J. B. and G. B. Hayes signatures may belong to persons other than described above, including Jacob Borton Hayes, the younger brother of OPS author Isaac Israel Hayes, MD. However, when considering signatures containing only initials (in lieu of full names), findings are potentially limited.

This and other online historical documents were used:
http://www.lib.rochester.edu/index.cfm?page=919