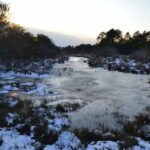 As I picked my way into their inner sanc-
Tum, a canopy of thick pine branches,
Soft pine straw carpet, worries of the
Outside world seemed to fade, as did
Sound and biting cold, nature’s protec-
Tion against winter’s first skiff of wind-
Blown snow.

Within minutes, chickadees and their
Embolden cousin, a crested titmouse,
Fluttered to nearby branches, chirping,
Chiding, they saw me, even though
I was sitting statue quiet, camouflage-
Clad, woman of sea trawlers bearing
Peanut butter suet.

Eyes bright and undaunted, Mr. Titmouse
And his lady landed with a “thunk,” they
Took a bite of suet and darted to head-
High branches, where they savored their
Evening fare. At the corner of my eye, a
Weary nuthatch chirped above my head,
Skittering upside down on piney boughs.

A cacophony of chirping continued, snow
Birds fluttering to and fro, spending shared
Moments with my friends deep within their
Wooded home, and for an hour, I beheld a
Rare bond of bird, branch, and song within
Their sequestered wooded realm that fell
Silent in winter’s dark and frozen nights.