To review a book written by an English professor who authors and reviews books is a daunting task. As an avid reader of 19th century Arctic expeditions, I found Dr. Potter’s book, Arctic Spectacles, to be an informative distillation of nearly 60 years of Arctic exploration, augmented with magnificent illustrations, informative quotes, and detailed footnotes — the nectar of historical reading and research.

Like many readers, I admit first flipping to the pages covering the ill-fated Franklin expedition, still intrigued by the search that engrossed Europe and America for over a decade. On this subject, Dr. Potter provides a comprehensive view of the visceral- 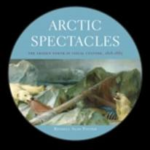 like interest in this Arctic tragedy, chronicling the role or near “intrusion” of Charles Dickens in the on-going hysterical disbelief over the missing Franklin crew and Dr. Rae’s account of cannibalism. Concurrent in Dr. Potter’s book, as they occurred in history, was a through discussion of the emerging visual aids of the time, such as photographs, lantern slides, and paintings that largely contributed to the Arctic “visual culture” of that time and are still relevant today.