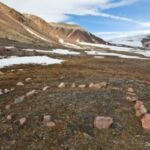 For isolated tribes of Paleo-Eskimos, short
Summers were the only relief from bitter
Winters on a hammered Ellesmere Island
Coastline. Huddled in skin tents covered
By heavy muskoxen hides, they found
Warmth from meager flame of dried moss,
Bits of driftwood, and liquefied animal fat in
Shallow soapstone lamps. Two lamps were
A luxury, as was a lapful of half-frozen
Whale blubber.

This tribe of early Dorset survived by
Subsistence hunting, taking seals and sea
Mammals, belugas and narwhals. Emerging
From a Neolithic age, they hunted in organ-
Ized bands throwing primitive spears at
Herds of defensive muskox. The bow and
Arrow yet to be invented, they also hunted
Polar bear, not by direct attack, a Dorset
Predator, kill or be killed, on hummocked
Ice or summer graveled beaches.

To kill a polar bear, they bent a flexible
Whale rib double, securing it with sinew
And a chunk of seal meat. When the bear
Swallowed bone and meat whole, sinew
Dissolved, and the rib sprang open. As
The bear bled deep within, Dorset followed
The wounded animal until it succumbed
From blood loss, an easy kill without
Fight by bear-weary hunters, armed with
Bone knives and stone skinning tools.

After decades of guidance, a selfish tribe
Became angry with Silla. With sharp stone
Knives they struck out into the air, their
Blades stained with godly blood. From this
Insult, the early Dorset lost guidance,
Protection from Arctic winds, brutal dark
Season. Starving and disease-stricken, they
Were abandoned by Silla. Lost and drifting,
The offending tribe met merciless death,
Loss of Silla’s sustaining warm life-breath.

During short summers on Ellesmere Island,
Archaeologists excavated tent rings near
Grise Fiord. After days of tedious trowel-
Work they found no bones, human or animal.
On windy afternoons, Silla’s voice quietly
Echoed amongst snow-streaked mountains,
across ice-covered streams, recalling that
With a single breath, he banished an early
Dorset tribe, all bones and stone tools,
From his High Arctic domain.