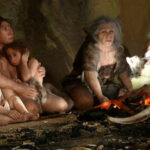 Life of a Neanderthal family, as depicted by the Neanderthal Museum in Krapina, Croatia. Photograph: Nikola Solic/Reuters

Strange footprints along an ocean strand
Alerted archaic-seafarers of encroaching
Cave-dwelling clan. A primitive tribe,
Trespassing amongst pines and salt
Marshes, searched for game that ranged
Near sea and open woodland.

At first, unfamiliar words fell on hesitant
Ears, as cave-clan chieftain voiced guttural
Sounds, their language void of syllables or
Syllabics. Their hunting range confined to
Safety of cave-homes, they knew not words
For swirling seas nor mastery of long ships,
Concepts daunting and cryptic.

Seafarers realized their heavy brows, thick-bone
Build, bespoke grotesque shapes of ancient times.
Stoic and declining, cave-dwellers’ lives were
Brutal, yet adoring of their own. In gathering dusk
They clung as one, skins and embers, against
Encroaching winds, breath of Arctic climes.

Returning to the clearing, seafarers bade farewell.
They drew bows, arrows raised in cold night.
Unleashed as one, they shrieked a hundred
Strong, killing cave-clan, young and old, with
Fierce might. Entombed in smoke-blacked caves,
Trespassers on seafarer shores were rock-buried,
Cruel sea-gales smiting primeval blight.

Much like the Neanderthals, the cave-dwelling clan in this poem was forced into extinction by the hands of competing violent tribes, disease, and/or changing climate. In time, archaic seafarers would also lose their place of prominence. Life, culture, and what we hold dear and love are transitory — the “berries and bone marrow” of family and seafaring heritage.