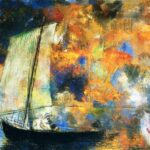 In sea-depth dreams I had drowned. Fiery
Flame and thunderbolts, new life was instilled,
Rebirth upon strands, unmeasured hillside
Tracts, ancient ruins my destiny, divinity once
There dwelt, sacred place of enlightenment,
Teaching, healing. Time-displaced, Athens was
But fledgling village, Sümer and my family not
Yet born. In fact, unsure I was who Sümer was
Or represented, if she was goddess-intended.
From this learnt: everyone has their place:
Living, dead, and those, in prayers to gods,
Reborn in life anew. Hear me! I am Altinay,
Sound of lute and lyre, clear-voiced songs
I sing, to Eileithyia, hymns of praise.

An ending more esoteric than planned, this last part returns Aristea (or Altinay)
to Cyprus, so that most of the story-line is flashback, except for enigmatic lone
fisherman. Who might he be or represent? Thanks for reading.