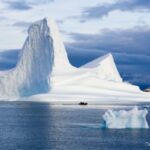 A tale I tell of my sea-adventure
Dark bitter watch gave way to light,
As warm sun fought bitter cold.
The day was bright, my bark strong.
And I survived the sea-storm’s tireless grip.
As day wore on, my sea-path true,
Mist and calm overtook my bark,
In a country of great-island ice.
Afloat in salt-sea waves,
They felt not wind’s bitter push
Against their towering course.
They knew not love nor song nor
Laughter of men in great mead halls.
Before me it broke in solemn roar,
A thunder-sound louder than
Raging sea, a hiss and scream that
Sent great fowl flying out of sight.
As a sword wielded from heaven,
The ice island cleaved in two.
From it came waves like a winter storm.
My bark I turned to face its wrath.
Ice and raging foam became my fate.
My bark held fast and steady against
Waves that launched against its keel.
At last the wretched ice rolled in
Death-hiss throes.  Thanks be to the
Holy One, I venture safe to foreign
Arctic shores.  Amen.

For years, I have been fascinated by the lyrical qualities of the Old English poem “The Seafarer,” including the modern-day interpretation and reading by Ezra Pound. While shorter in length, I hope the “Arctic Seafarer” follows the spirit of the original poem in structure and in relating the rigors of a small sea-going boat, especially when encountering a large iceberg as it breaks apart. Technical note: Because so much mass is beneath the ocean surface, large icebergs are pushed by deep currents and at times against opposing winds, a sea-fact our “Arctic Seafarer” recognized.