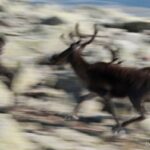 Before Norse longboats explored this noble land,
The people followed caribou herds. Carrying all
They owned, the tribe abandoned safety of sod
Homes to living in summer skin tents. They took
To meandering trails, from forested taiga to
Tundra calving-grounds, savage barrenlands
Above the remote tree-line of Labrador.

Prepared for caribou hunting, we hid in narrow
Rocky passages where only two or three caribou
Could pass, close enough to hear snorting breath,
To feel broad hooves cleaving stone and earth,
Before well-placed arrows, razor-sharp copper
Broadheads brought their lives to a bleating,
Tumbling end.

Returning to our camp, we found Ahnah bleeding,
Scarcely breathing. Panic in her eyes, she pleaded
For us to save her unborn child. Shrewd as a stalking
Wolf, Pinga, goddess of hunt and fertility, offered
To take Ahnah’s life so that her child would survive,
A pact to which our daughter willingly agreed, her
Body cold and ashen.

Skilled at crafting skin clothing, I raised my obsidian-
Blade knife and opened Ahnah’s rounding belly,
Exposing a moving infant within its maternal
Sack. To our wonderment, we witnessed ancient
Inuit beliefs, as Pinga guided Ahnah’s soul-light
Into the infant-daughter, forcing gasps of air,
First crying breaths of mortal life.

In dizzying moments, my husband and I lost a
Loving daughter and gained a new granddaughter,
Ahnah, born to us again. As a growing girl-child,
We recognized her familiar voice and habits,
Knowing dark eyes, and thick hair, in broad sun-
Light shining black as raven’s wings, reassuring
That Ahnah renewed our family bonds.

As an Arctic people, we have long suffered with
Death and disease. Spirituality is strengthened
By small miracles, many left untold. Ahnah, a
Caring mother with children of her own, now
Makes the arduous trek to give thanks for Pinga’s
Miracle at caribou birthing-grounds, her place
Of death and awakening in northern Labrador.